Istanbul (Turkey) is known and famous around the world for its melting pot of cultures halfway between West and East, for its incredible architectural works and for its scents. To give this beautiful city even more resonance, there was a cat who, in recent years, has become a real web celebrity.

Today Tombili is no longer of this world because of an illness but his fellow citizens wanted to honor him as he deserved.

Not everyone probably knows the story of Tombili the cat who has become a real celebrity in Istanbul. This cute cat had become famous on the Internet for the languid poses he took when relaxing on the walls and sidewalks of his neighborhood. Although he was a wanderer and did not have a real home, Tombili was much loved by the townspeople and everyone took care of him and, judging by his belly, he never ran out of food.

The cat thus became the mascot and the symbol of the city, reminding passers-by who met him to live life with more tranquility, less stress and to find a moment of relaxation . Sadly, Tombili fell ill and, despite the best efforts of his fans, died a few days later, leaving the whole city heartbroken.

Many began to leave notes and signs in memory of the cat on his favorite bench and on the sidewalk that made him famous. This elicited a reaction from his biggest fans, who felt it was right to honor the cat  as it should to keep his memory alive forever. Thus was born the petition in honor of Tombili and to erect a bronze statue representing the feline in its most ” emblematic ” pose .

After collecting 17,000 signatures , the statue has finally been revealed to the public, humans and other cats in the neighborhood who will have to try to honor Tombili’s heavy legacy.

Today the Tombili statue is the memory of a special cat who taught people who loved her to relax and enjoy life! 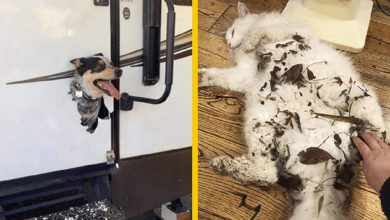